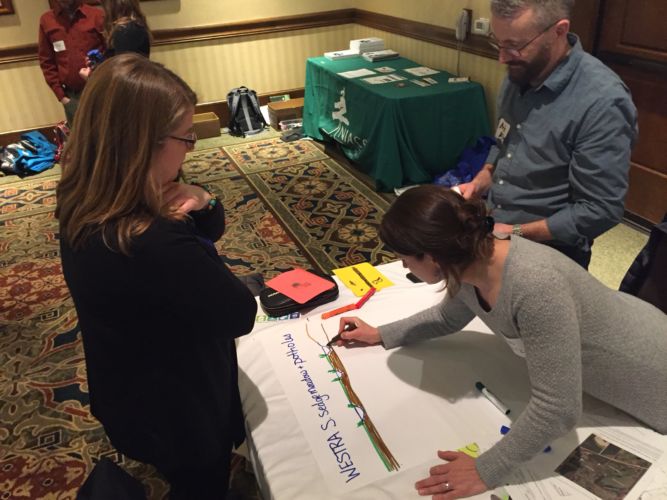 The Friday after the Wetland Science Conference in Lake Geneva, Wisconsin, 25 people dug into a brand-new tool for wetland management facilitated by the Northern Institute of Applied Climate Science (NIACS), the Wisconsin Initiative on Climate Change Impacts (WICCI) and the USDA Climate Hubs. The group was comprised of consultants, academics, land managers, and agency and NGO professionals. Together, they worked in small groups to identify climate change risks and adaptation tactics for nine wetland properties in Wisconsin.

Small group leaders defined goals and objectives for their site beforehand so groups could focus on steps 2-5 in the workshop. Once we began to assess site-level climate impacts and vulnerabilities, it was clear that some site objectives were going to be challenging to maintain into the future. However, it was not all doom and gloom as we also evaluated potential opportunities arising from climatic change.

We then identified adaptation strategies and approaches that would incorporate climate change into management. The leaders likened this part of the process to a “Choose Your Own Adventure” book because the menu provides many potential options to choose from rather than being prescriptive. The tactics range from creating buffers around existing wetlands to introducing species from other regions that may be better adapted to the future climate at the site. The final step was to select monitoring variables to track the effectiveness of the adaptation approach.

This workshop was the trial run for using the adaptation workbook process for non-forested wetland systems. The non-forested wetland “menu” of tactics we used is still being revised by a WICCI working group; however, it is quite extensive including at least 29 adaptation approaches and many more individual tactics. Soon it will be available to use with adaptationworkbook.org, which guides you through the five-step process online. (Someone referred to it as “TurboTax for climate adaptation”.)

Wetland landowners and practitioners using the adaptation workbook would benefit by:

The main take-home point from the workshop is that we don’t have to be stuck in what Danielle Shannon from NIACS refers to as “decision paralysis” regarding how to act in the face of an uncertain future. Rather, we now have access to tools and resources to support decisions that will enable wetlands in Wisconsin to serve their essential ecosystem functions into the future.

Thank you to Danielle Shannon, Todd Ontl, and Courtney Peterson from NIACS for facilitating the workshop, Amy Staffen from the WDNR for organizing the workshop, and the WICCI Plants and Natural Communities Working Group for their hard work in developing the adaptation menu for non-forested wetlands.