Watch for giant hogweed in your wetland 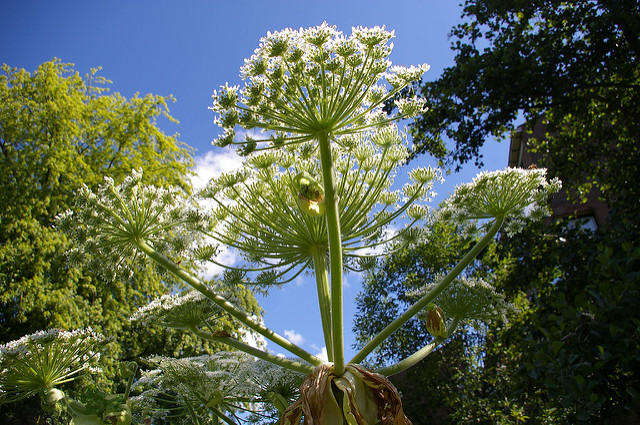 The tall invasive plant giant hogweed was first found in Wisconsin in 2004 and has been confirmed in Iron, Portage, and Manitowoc Counties. It was recently found in Sheboygan. A single plant produces thousands of seeds, which can be dispersed by gravity, vehicles and gear, flowing water, or animals. Giant hogweed prefers moist shady areas.

Giant hogweed is a “monocarpic perennial”, which means it grows as a lowing-lying bushy rosette for the first several years and bolts with a flowering stem in later years. The plants grow 8 to 15 feet tall and blooms mid-June to late July. The hollow, ridged stems have coarse white hairs and reddish-purple mottling. Giant hogweed can be confused with our native American cow parsnip, wild angelica, and other similar plants. Use these three good guides from New York, Washington, and Illinois to help with identification.

Be careful! Sap from the leaves and stems of giant hogweed can cause severe burns and blisters on your skin. Always wear long sleeves and gloves when working with this plant.