The symphony of spring 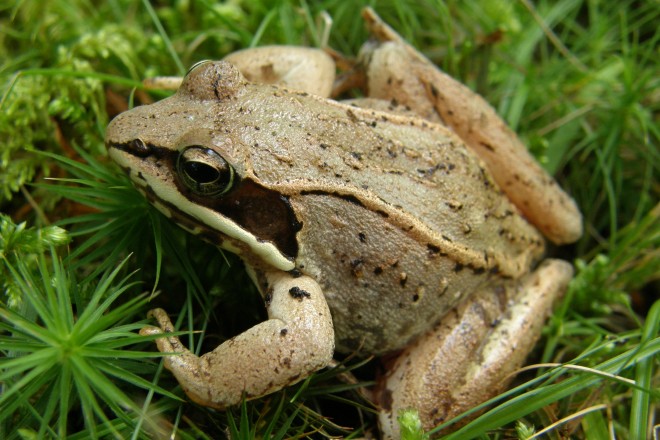 A big truck rumbled by as I squeezed the brake levers and guided my bike onto the shoulder. The wonderfully warm, sunny afternoon had lured me out on an adventure, and my first stop was this small, roadside wetland. With a southwest exposure, this marsh thaws a day or two sooner than the one by my house, and I head here each spring to listen for the first frogs.

As the truck’s noise faded, silence fell over the forest. Peaceful, yes, but not what I’d hoped for. Could the wood frogs still be waking up? It does take them a little while to recover from being frozen all winter. With the arrival of warm temperatures, wood frogs thaw from the inside out.

Recovery is relatively rapid—especially considering what they’ve been through—but not instant. The frog’s heart starts beating before they are fully thawed. Breathing resumes soon after, and circulation begins as soon as their blood melts. That doesn’t mean the frog is ready to hop off into the sunset, however. It takes more than five hours for their leg muscles to regain some function and up to 24 hours for the frogs to exhibit normal body postures and coordinated muscle functions.

A couple of days later, their mating drive kicks in. That’s what I stood there hoping for, in the silent woods. Then, from the back corner of the wetland came a soft quack. And another. Then a second frog called softly from another shore, and a third chimed in tentatively from near the road. From there, the chorus crescendoed until a cacophony of quacks, chuckles, and clucks echoed through the woods.

For the next few weeks, this wood frog choir will continue their performance whenever the temperature rises near 50 degrees and above. It is mostly males who call, and the impassioned sound serves to attract females to their pond. The more females their calling can attract, the better chance each male has of finding a mate. 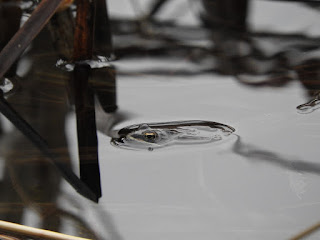 As frogs arrive at the pond and mill around, eager males will search for a mate. They can’t see or smell a difference between females and other males, though. Instead, a male frog hugs another frog from behind and around its waist. Fellow males, identified by their slim waist, give a loud croak and are released. A slender female, who has already released her eggs, also gets a pass. But when a male frog grips a plump female—chock full of eggs—he hooks his thumbs around in front of her and doesn’t let go. This is called “amplexus.”

From there, the female deposits her eggs in a floating mass and he fertilizes them as they emerge from her body. Many wood frogs in a pool may lay their eggs together. The earliest breeders benefit from their eggs being in the center of the mass where they absorb heat, develop faster, and gain protection from predators. Each individual’s 10 cm diameter egg mass contains from 1000 to 3000 eggs. 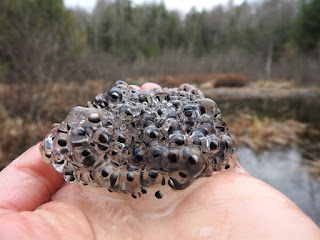 This mass of wood frog eggs will soon become a swarm of tadpoles—who will eat mosquito larvae with gusto! Photo by Emily Stone.

Eggs laid now, in the cold infancy of spring, will mature slowly, over the course of a month. Later in the spring, when the water has warmed, the eggs may hatch in only 10 to 14 days. The amphibious parents have completed their responsibilities, though. They don’t stick around to provide care, cheer at baseball games, pay for dance lessons…

…Or teach their little tadpoles to ride a bike. Thankfully, I’m human!

As the frog chorus reverberated, I swung back onto my bike and continued around the lake. Wood frogs were only the beginning.

With my ears now tuned in, the jingle bell chorus of spring peepers became apparent everywhere. A few chorus frogs, with their “fingernail-on-the-teeth-of-a-comb” call, chimed in. Two black-and-white ospreys perched on top of their nest platform and swooped into flight as I approached. A bright orange fox with sleek new fur bounded through the ditch. As I slowed to look for more loons from a short bridge, the clear whistle of a song sparrow reached my ears.

All along the road, frogs croaked and peeped, robins whinnied, juncos trilled, and geese honked. Silence has gone out of style. Let the symphony of spring commence! 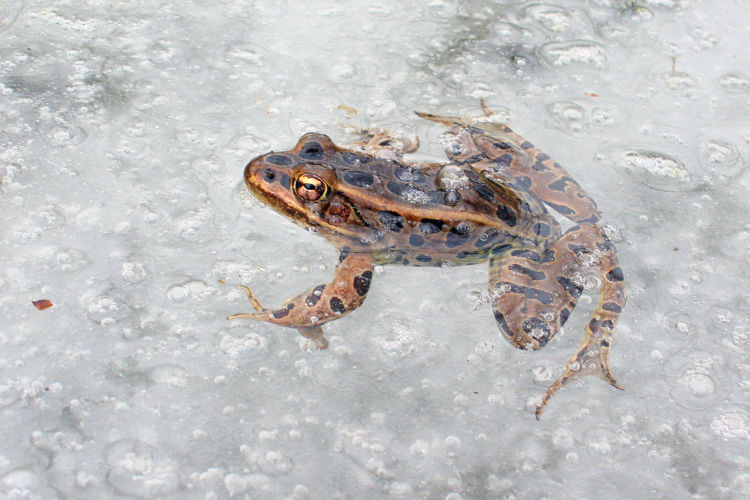 Many might wonder if Wisconsin’s native frogs are hard hit by the late snowfall. Fortunately, frogs have several adaptations for over-wintering. 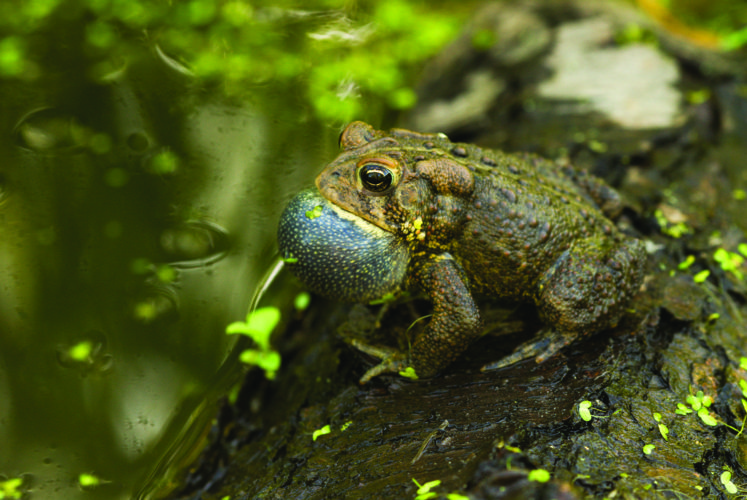 Identifying frogs and toads by their calls

Spring is a great time to get out to listen for these amphibians.