Crane count classic: Capturing the history of the early years 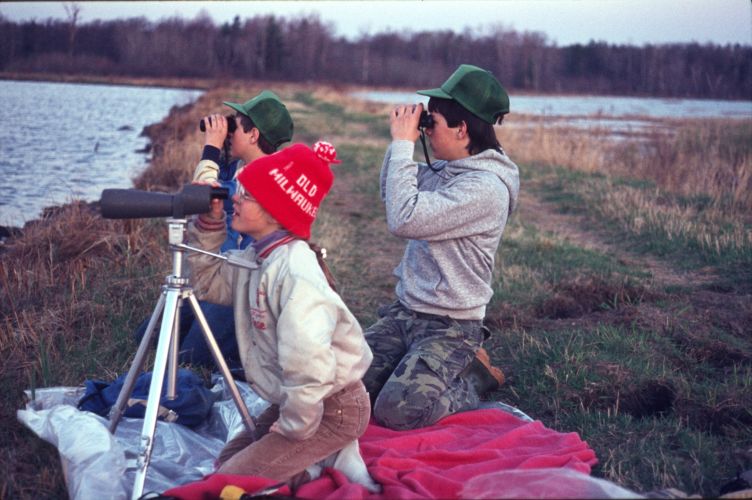 Each year in mid-April, more than 2,000 volunteers travel to their local wetlands and favorite birding locations to participate in the Crane Count. In celebration of the 40th anniversary of the Crane Count, WWA member Karen Voss tracked down the history of the count’s inception for the WWA 2015 newsletter. That story is below. For more information about the Crane Count, visit the International Crane Foundation’s website at savingcranes.org.

I encountered my first Sandhill Crane in the spring of 1973. As a first-year graduate student and an ornithology teaching assistant, I was weak at the knees with my inexperience, yet loving every minute. George Archibald and Ron Sauey, recently of Cornell University, were just establishing the International Crane Foundation (ICF) on the northern outskirts of Baraboo, WI.

Few researchers studied Sandhill Cranes until the early 1970’s, when a small Wisconsin explosion of interest and advocacy for cranes and wetlands occurred. Archibald began extensive field surveys, hoping eventually to initiate a wild population of Whooping Cranes in Eastern North America. At UW–Stevens Point, Ernie Gluesing, a wildlife biology graduate student under Dr. Lyle Nauman, surveyed the state’s population and estimated a total of about 850 Sandhills. On the heels of Gluesing’s research came the work of several more of Nauman’s graduate students, all working to better understand the ecology of Sandhill Cranes.

Meanwhile, Jim and Libby Zimmerman’s fight in 1969 to protect wetlands from a freeway expansion in Madison marked the beginning of what was to become the Wisconsin Wetlands Association (WWA). Under the Zimmermans’ guidance, WWA became a broad-based organization working on education and advocacy.

By the mid-1970’s, the common interests of ICF, WWA, Wisconsin Department of Natural Resources, and wildlife researchers began to coalesce into a collaborative effort. With ICF’s encouragement, and with guidance and advice from graduate student Alan Bennet, a high school teacher and his class counted cranes in Columbia County. With that first citizen survey effort, the need for more “eyes on the sky” and “feet on the wet ground” became evident.

After graduation from UW-Stevens Point in 1977, Charlie Luthin worked at ICF, assisting with early citizen survey efforts. The beginnings of the Crane Count began to take shape in 1978, with a collaborative planning effort involving WWA, Madison Audubon Society, and ICF. Five counties were surveyed that year: Columbia, Sauk, Dane, Dodge, and Jefferson.

Luthin began graduate school at UW-Madison in 1979 and became active in Madison-based WWA. With Charlie’s leadership, WWA agreed to take over the lead responsibility for the Crane Count, freeing ICF to spend time on other valuable research. 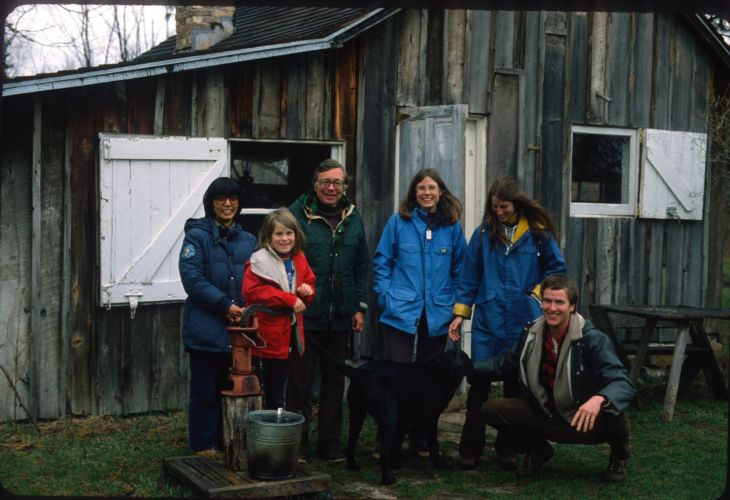 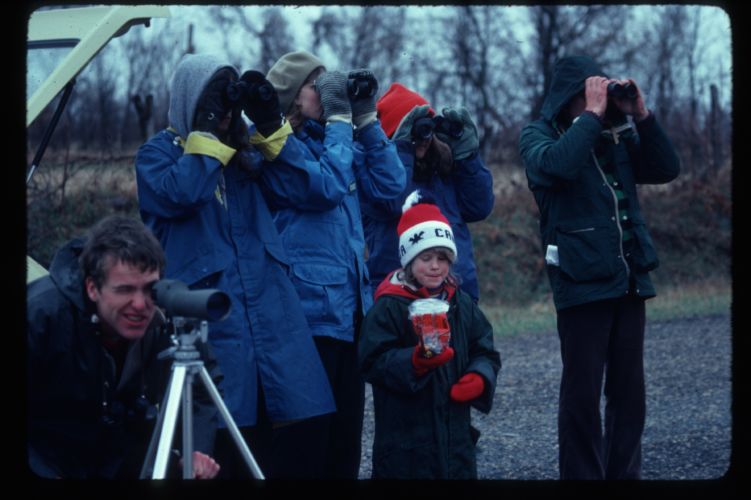 A few minutes after this photo was taken, the young girl in the foreground (daughter of the author) scanned the field with the spotting scope and, all on her own, located a crane nest the adults had been searching for! 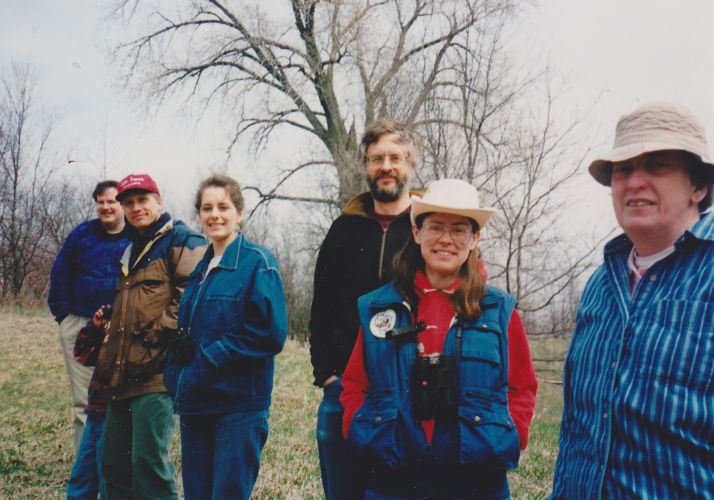 The Crane Count soon became the culmination of WWA’s Wetlands Week, an annual springtime celebration of wetlands. During this period, the numbers of Crane Count participants (and cranes) steadily grew. With its near-statewide scope and established consistency of data collection, the Crane Count became a critical tool in assessing the abundance and distribution of cranes, documenting the growing expansion of the population into previously unused wetlands. By 1985, ICF’s growth allowed them to resume management of the Crane Count, organizing county coordinators and tabulating results, while WWA continued to be a strong source of participants.

In mid-1990, surrounding states joined the Count and the name of the event was changed to the Midwest Sandhill Crane Count. Ten years later, coming full circle from George Archibald’s 1972 vision of reintroducing Whooping Cranes to Wisconsin, the Count was renamed again to the Annual Midwest Crane Count, reflecting the promising Whooping Crane reintroduction efforts. In 2012, the event took a big step into the electronic age, with data being entered by participants directly into the massive online database eBird.

Through the more than forty years of Crane Count’s history, some things remain unchanged. The Crane Count continues to be an annual rite of spring for many. Before dawn on a mid-April day each year, high school classes, 4-H kids, lifelong and first-time birders troop through the dark to their assigned wetlands. The collective steam of hot coffee cups rises into the misty morning air. A tentative robin calls and the last of the nocturnal woodcock peents reach listening ears. Finally, a distant bugle of cranes or the swish of near-silent coasting cranes passing overhead is heard. Pens and pencils come out of pockets, binoculars are lifted, and for two hours, several thousand hardy souls experience an ancient dawn on a wetland, much as it may have been experienced for the past millennia.

Join us for a special 50th Anniversary event on May 28th, 2019, to learn how protecting our Wisconsin wetlands has led to one of North America’s greatest conservation success stories.

The Trumpet in the Orchestra of Evolution: Wetlands and Sandhills in Wisconsin with Anne Lacey of the International Crane Foundation.